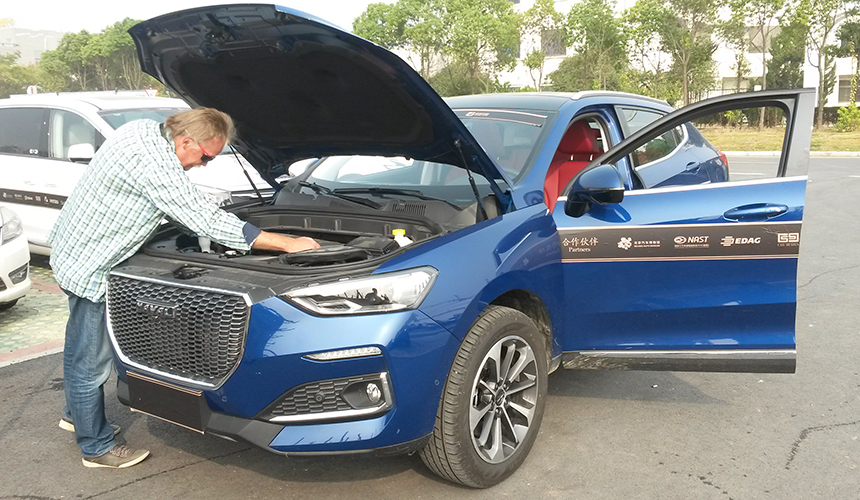 For many European vehicle manufacturers, China is one of the most important markets. Any yet in China's Middle Kingdom, there are many Chinese manufacturers still largely unknown to us here who are trying to break into the market – not least due to the trend towards eMobility. But this is about to change; the new Chinese brands aim to gain a foothold in Europe in the future, too. However, a quality campaign will be necessary if they are to have a chance in the western automobile markets. For precisely this reason, the XUANYUAN Award was launched by international management consultancy EFS and the Chinese automobile consumer magazine AUTOBUSINESS REVIEW, to have the quality and performance of Chinese cars assessed by a jury of experts.

The yardstick in China continues to be the European quality level, which is meanwhile also echoed in the dynamic consumer perception criteria. Among the leading, mainly privately owned Chinese vehicle manufacturers, the definition of their own dynamic product DNA has already been established. The vehicles are designed for international marketability, which is also evident from the local pricing structure.

For the 6th XUANYUAN Awards contest, the EDAG Group was once again included in the jury selected to assess dynamic vehicle attributes and marketability. 36 vehicle manufacturers presented vehicles that had been produced in China to the 55-strong European and Chinese jury this year. The entries included 25 Chinese brands and 11 joint venture brands from a total of 7 product segments of the Chinese manufacturers. In addition to 22 vehicles with conventional drive systems, there were also 14 vehicles with alternative drive system (five plug-in hybrid vehicles/PHEVs and nine battery electric vehicles/BEVs).

The EDAG Group, one of the largest independent players in the engineering service provider environment, provides global vehicle and production plant development support for European and international manufacturers. For more than 10 years, the company has maintained a subsidiary in Shanghai, and has unequivocal knowledge of the market and experience in working with Chinese customers. This meant that we were ideally qualified to point out specific and substantiated potential for the Chinese manufacturers in this competition, to enable them to optimise their products in line with European engineering standards," explained Harald Keller, Head of Vehicle Development at EDAG. "In addition, acting as an independent member of the XUANYUAN Awards jury enabled us to gain exclusive insights into the Chinese vehicle market and current development status of eMobility."

As China has meanwhile become the world's leading market for BEVs, special attention was paid during the XUANYUAN Award to electric vehicles, large quantities of which are now marketed as mass-produced products in the volume segments B/C/CD in China. The assessment focussed mainly on the motor, powertrain, acoustics, driveability and energy storage system.

A number of startup manufacturers impressed the judges with the performance and quality of their different technical concepts and strategies. In addition, the jury examined and compared European, Japanese and Korean volume products in the development of which EDAG had been involved with their Chinese counterparts from local joint venture productions.

EDAG's European-Chinese team of experts were able to bring their extensive competence in the development of complete vehicles and international background to bear in R&D and product definition. The vehicles underwent static and dynamic testing in accordance with EDAG's catalogue of release criteria for all dynamic vehicle attributes and EDAG's "world customer requirements" standards.

The road tests were performed at the Xiangyang test site and on public roads selected by EDAG. In the speed profile, the route selection corresponded proportionately to the WLTP cycle and reflected usage of the various vehicle categories in the Chinese market.

"I see the XUANYUAN Award as a successful intercultural-technical exchange. For this reason, we will continue to serve as a member of the jury this year, too," confirmed Harald Keller. "An experience that is sure to prove to be of great value and use in further projects with our Chinese and international customers."