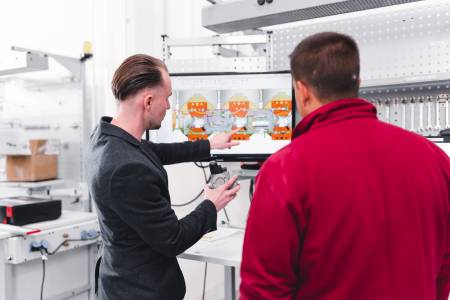 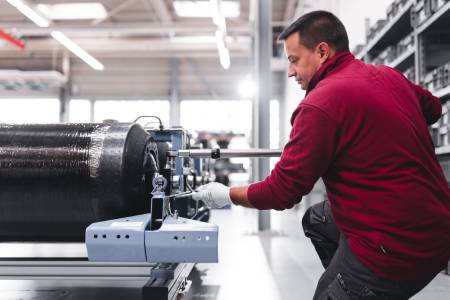 A double-decker bus, whose only emission is water, leads the way for the “green” city of the future. A key factor in the process is ensuring that the fuel cell drivetrain of the vehicle is safely supplied with hydrogen. EDAG Group together with NPROXX, a leading global system supplier of high-pressure hydrogen storage systems for stationary and mobile applications, have developed a pioneering concept to this end. It will be presented for the first time from October 19 to 22 at the Hydrogen Technology Conference & Expo Europe in Bremen. Well over 5000 hydrogen and fuel cell experts from across the technical supply chain and numerous end consumer industries will be able to get a better picture of the innovation.

“Over the past few decades, hydrogen has repeatedly been on the verge of a breakthrough as an energy carrier and important contribution to reducing global carbon emissions. However, the big success failed to materialize. Meanwhile, hydrogen drivetrains are relevant as never before,” explains Harald Keller, COO of the EDAG Group. “EDAG Group has never lost sight of hydrogen as a technology path for alternative drive systems, and for this purpose, we at EDAG have bundled our expertise in the “Energy Systems and Drivetrain” division. In this way, we were able to make a significant contribution to optimizing the innovative hydrogen tank system, which, in addition to the other innovations from EDAG Group, will be showcased at the Hydrogen Technology Expo.”

“Modern local transit and regional bus systems are a central area where the hydrogen economy will make a positive impact on the lives of residents,” Michael Himmen, Managing Director for Sales at NPROXX, is convinced. “As a global player in the hydrogen industry, we are committed to the ongoing improvement of existing solutions and the development of new technology generations. With the EDAG Group, we have a competent and capable collaborative partner on our side.“

The handling of hydrogen requires safety measures unlike those used for conventional fuels such as gasoline or natural gas. Hydrogen is also subject to stringent regulatory provisions. “The EC-79-certified tank system introduced in Bremen, is designed for an operating pressure of 350 bar, where four hydrogen tanks stacked one upon another are accommodated in the vehicle body, becoming a part of the load-bearing structure of the bus,” explains Roberto Diesel, Vice President of Energy Systems and Drivetrains of the EDAG Group.

The realization of this concept required the cross-departmental collaboration of various areas of expertise, ranging from electrical and electronic engineering to software & digitalization up to complete vehicle development and in-house production solutions. “Working from this holistic perspective, we are in a position to develop innovations from the initial idea up to mass production like the hydrogen tank system for busses,” says Roberto Diesel who will report in detail on the impact hydrogen applications make on the vehicle architecture during the conference segment of the Hydrogen Technology Expo on October 20.

In the area of hydrogen drivetrains, EDAG Group is specifically focusing on hydrogen tank systems, ranging from the development and integration of systems to processing the associated data, all the way up to the end-of-line inspections, using special diagnostic procedures and stress tests. From the starting point of a freely scalable production of prototypes up to the mass production of any quantity. Furthermore, EDAG Group is working on initial filling methods such as, for instance, an automated alternating pressure flushing system or vacuum inertization to protect against uncontrolled ignition or explosion. “The solutions we have already realized using EDAG's various areas of expertise confirm that the next step we are taking is the right one,” says Roberto Diesel. “We have already achieved a great deal with our customers, but together, we can achieve far more.”

The hydrogen tank system and other exhibits of the EDAG Group can be explored in hall 5, booth 4200, during the Hydrogen Technology Expo.

Images: Driving through a city without emissions – EDAG Group and NPROXX are presenting an innovative hydrogen tank system for a double-decker bus at the Hydrogen Technology Expo (Photography: EDAG Group).